Port-Hamiltonian systems are network-based models that are formed by decomposing a physical system into submodels that are interconnected via energy exchange. The submodles may arise from different physical domains, such as e.g. electrical, thermodynamic, or mechanical systems.   The  port-Hamiltonian structure is preserved under power conserving interconnection, and properties stability, passivity, as well as conservation of energy and momentum are encoded directly into the structure of the model.

When the  Interconnection of submodels leads to further constraints such  as Kirchoff’s laws or position and velocity constraints  in mechanical systems, then the appropriate model class is that of port-Hamiltonian descriptor systems. In the last year model reduction techniques for port-Hamiltonian descriptor systems have received substantial attention and major progress has been made in substantially reducing the model dimensions while fully preserving the constraints.  This has a major impact on the use of these models in practice. While the dimension of the dynamical part can be drastically reduced, the constraints are still valid, so a replacement of the full model by a reduced model in any  subcomponent will not violate the underlying physics and thus each subcomponent can be modelled as a modl hierarchy where depending on the application a detailed or a coarse model is used.

For examples of controlled flow problems or mechanical multi-body systems.

About the author:
Professor Dr. Volker Mehrmann is full professor for Mathematics at Technische Universität Berlin and the president of the European Mathematical Society (EMS). Moreover, he is the coordinator of the ROMSOC project.

Alongside his activities for the EMS, he has been sitting on the boards of the International Council for Industrial and Applied Mathematics (ICIAM) and the EU-MATHS-IN initiative, which promotes collaboration between mathematics researchers and industry. Additionally he is a member of the German Academy of Science and Engineering (acatech) and acted as spokesperson for the Berlin research center for application driven mathematics MATHEON between 2008 and 2016. 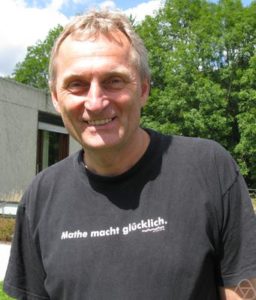 His research interests are in the areas of numerical mathematics/scientific computing, applied and numerical linear algebra, control theory, and the theory and numerical solution of differential-algebraic equations. In recent years he focuses on the modelling, simulation and control of systems described by port-Hamiltonian differential-algebraic systems, which form an exciting and very promising new modeling paradigm.